Scandal, a pop rock group from Osaka, Japan, has been announced that they’ve arrived to Jakarta yesterday in their twitter account.

Pictures taken by Scandal-Rina to fans who welcomed them at Soekarno-Hatta International Airport,Jakarta.

Scandal Mami’s tweets right after she arrived in Jakarta.

This year, they will hold an international tour not only in Indonesia but also Singapore and Thailand.

Marygops Studio is the sole promoter for Scandal this year after their success to bring L’Arc en Ciel last year in May and hold a festive to all Japanese rock fans all over Indonesia. Haruna Ono (vo,gi), Tomomi Ogawa (bs,vo), Mami Sasazaki (gi,vo), and Rina Suzuki (dr, vo) will hold their first live in Indonesia on Wednesday, 13 March 2013 at Tennis Indoor Senayan. The video greeting for Indonesian fans can also be watched in Marygops’ Youtube account.

The band has performed the theme songs for many anime, including “Sh?jo S” for Bleach and “Shunkan Sentimental” for Fullmetal Alchemist: Brotherhood. In Indonesia, the fan base for anime and manga is pretty big. Since there are several events hold annually with majority of fans cosplaying and enjoying the performance, I believe Scandal has built a considerable Indonesia fanbase,too.  The ticket price of Scandal live concert are as followed:

Besides Rajakarcis, the ticket will be sold on the spot too according to Marygops’s twitter today. 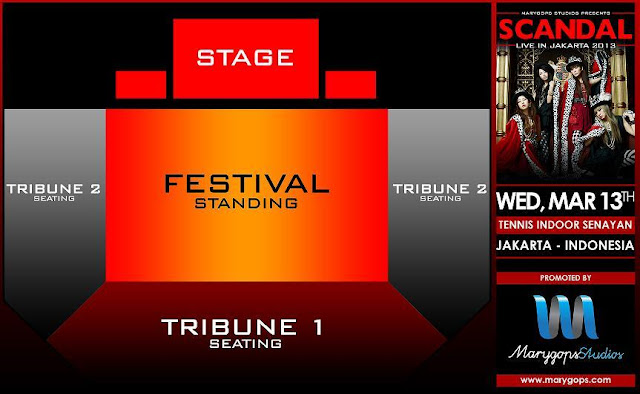 See you tomorrow! Let’s have fun together~~