Since morning, Osaka’s weather was not really supportive. It was raining the whole day, even during the queue, people had to wait with their raincoats or umbrellas. If Kojaconists are going to attend May-June’s live, please don’t forget to bring raincoat or umbrella since these two months, Japan has rainy season where rain can fall throughout the entire day.

Zepp Namba is a bit far from Namba JR Station. Around 20 minutes by walk. The nearest station would be Daikokucho Station or Imamiyaebisu Station. If you have JR Pass and lots of time to spare, you can stop at JR Namba station and find way to Namba Parks which is pretty much like a plaza. Zepp Namba will be 5-8 minutes by walk from there. But if you’re not fond of walking, just stop at Daikokucho Station or Imamiyaebisu Station, only 5 minutes to Zepp Namba.

The show started at 6.45 pm sharp, but the queue was opened at 6.30 pm. Make sure you queue on time. If you want to buy goods, you can come at 3.30 pm to start queuing for the goods. Actually you can buy the goods even after the concert ended, but sometimes, the goods will be sold out even before the concert starts. This time, the goods which are easily sold out in every place is the gray skull t-shirt cost 3500 Yen. You can also give presents to the artists inside the box given in entrance hall.

At 6.45 pm, Alice Nine started opened the show with the same setlist like in Nagoya. We’re at Shou’s side in the middle this time. If you want a greater view of the stage, we would recommend you to choose the middle side because basically you can see everyone in every position clearly. But if you have a biased member, it’s your choice lol.

The performance is hyper than in Nagoya since the fans are wilder. There are more older fans we saw here rather than in Nagoya where mostly teenagers. However, the older fans stamina and their loud voices are very different. Their growl, their headbang, their jumps, were basically greater. We know that Osaka people are ‘atsui‘ (hot) but this atmosphere certainly the atmosphere that comes near to Indonesian’s live. 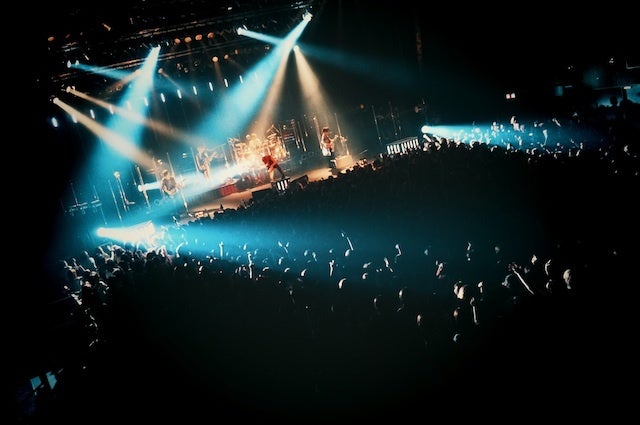 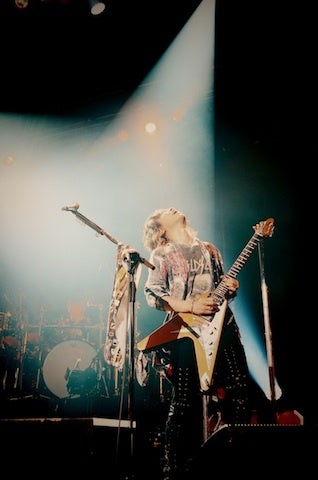 The screams during the song break were neverending, calling the names of Alice Nine’s members and they seemed to like it. What we’re really amazed was how the fans stopped screaming while the song melody started to play. It’s really different while we watch concerts in Singapore, Indonesia, or Malaysia though. The fans in Japan really want to enjoy the song so while the song is played, they enjoyed it with their gestures, not with screams. Different country, different cultures, right?? Even in Japan, different area, different fans attitude ^^

The same setlist was played, but different mc host and different song at the first encore. The MC starts with Hiroto-san and Nao-san came to stage. Well actually, Nao-san came to stage a little bit late. He’s in the toilet before. lol. As expected from Nao-san. They introduced the new mc system to the audience, where two members of Alice Nine will come to the stage differently in every live.

The funny part, Nao-san stayed in Shou-san’s place, yes, right in the middle, while Hiroto-san stayed in his usual place. Hiroto-san even mentioned that it was really rare to see Nao-san in the middle of the stage with the standing mic. Since Nao-san is shorter than Shou-san, so the standing mic was still to high for him, he kept talking while tilting his head to the mic. The point of their talk is to promote the goods they sell for the concert. Nao-san took Alice Nine-Daybreak’s bag on his right hand like he wanted to go supermarket casually. Everyone laughed because the way he brought it and the way he walked were really funny. Then they started to call out the goods and show it to the audience.

When Saga-san came to the stage he wore the t-shirt, so they started to promote the t-shirt as well. Then the last, when Shou-san came to the stage, he was teasing Nao-san because Nao-san always get late even in Alice 9 Channel because of the toilet matter. He also mentioned that he wanted to to go for mc too because he hasn’t got the chance. Hiroto-san then teased him saying he’d better be the mc at the next live, alone. And Shou-san was a little bit sulking. He even imitated if he came on stage alone and say hi to the audience. Meanwhile when Shou-san was talking, at his back, Saga-san kept playing the sound effect from Affection song, ‘Come on! Come On!’ part, or ‘YEEAAH!’ part, to disturb Shou-san’s talk. And he giggled himself at the back. Everyone was in their cute mode in this mc part.

Anyway as soon as the five members entered the stage, they started to play Senkou. Maybe they chose this song to balance themselves with the wild audience. Then they continued with Heart of Gold, and closed with the beautiful name.