What is One Hand Food?

In recent TV show, High Noon TV Viking, audience were introduced about “One hand food” which are famous in Japan. “One Hand Food” is a kind of snack which is able to be eaten by one hand only. This kind of food is famous for people with no time for lunch or youngsters who love to hang out, no wonder this kind of food is getting more well known in Japan.

Some of the famous ones are burgers and hot dogs. However some of these foods have been modified and become extremely famous with Japanese youngsters. For example, on 17April, the Japanese McDonald’s released new product called Avocado chicken burger and Avocado shrimp burger. Many people praise this mix of fruit inside the burger, well, at least this burger looks healthier than before. What do you think?

Besides this Avocado burger, there are some more foods which are famous. What are they? Let’s check it out!

1. Harajuku Ice Dog
This ice dog is a modification of the normal hot dog. What make it famous probably because it’s in Harajuku, the Japanese’ Mecca for youngsters. Besides Harajuku, we can also find this store at Amerika Mura, Osaka. The ice dog offers something similar to crepe but it use hotdog’s buns instead of crepes. The buns are filled with cold cream and topped with fruits. If you happened to stroll around Harajuku, make sure to try Ice Dog which is popular with Japanese youngsters!
Check their facebook account here or twitter account here.

2. Pancake Sandwich
Located around Tokyo Station ticket gate, you can easily find this new store which just opened on 30th January 2014, named Patisserie Kihachi & Rusan Palm Grand Star Dining. The restaurant combined pancake and sandwich filling to this food product. The content of the pancake sandwich is marinated vegetable, sausages, potato salad, or tuna. You can bring it for picnic or eat it with one hand inside the train.

There were two pancake sandwich menu released in January,  “Sausage & Egg” and “Tuna & cheddar cheese”. The “Sausage & Egg” which has a slightly sweet taste, consists of sausage, basil, marinated vegetables, eggs, and also mustard basil sauce. The price is 580 yen. 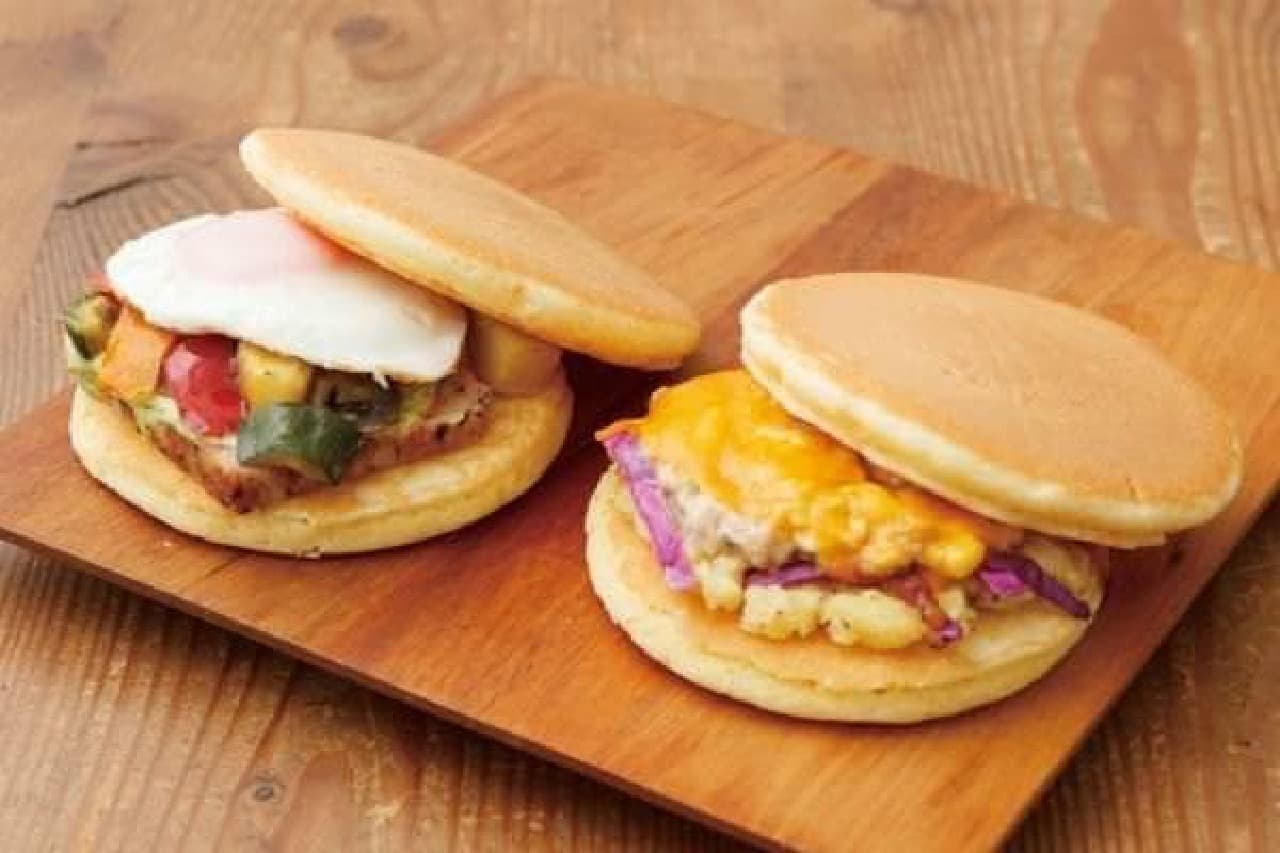 Based on American Dog, the Austrian Baumkuchen cake is modified to become this ‘baum tree’. The most famous store is Nenrin-ya which is available in Tokyo.  Claimed as the king of baumkuchen shop in Japan, Nenrinya, has created mini baumkuchen on a stick. If you happen to go to Tokyo Sky Tree, try to find the shop at Solamachi Food Shop. The newly-opened Yaki in Harajuku is offering a Japanese twist on the dish with okonomiyaki burgers. By baking the mix, which is 80% vegetables, rather than cooking it on a grill, Yaki have created a firmer okonomiyaki which holds together strongly enough to be used as the bread bun in their unconventional burger. Fillings range from chicken teriyaki to vegetables and cheese and prices start at just ￥350. Which one do you think you’ll try during your visit in Japan? At least, while you’re in Japan, I hope you also try to have the culinary tour besides strolling to temples and shopping gadgets~