The annual SKECHERS SUNDOWN FESTIVAL is finally here again! Kojacon catches up with the artists in the press conference held at Park Royal Hotel on 21 November, one day before the festival itself.

SKECHERS SUNDOWN FESTIVAL has always been well known as the year end Asia music festival in Singapore. With 16 artists from 11 countries this time, we have WEAVER representing Japan and their junior from the same agency, CROSS GENE representing Korea. 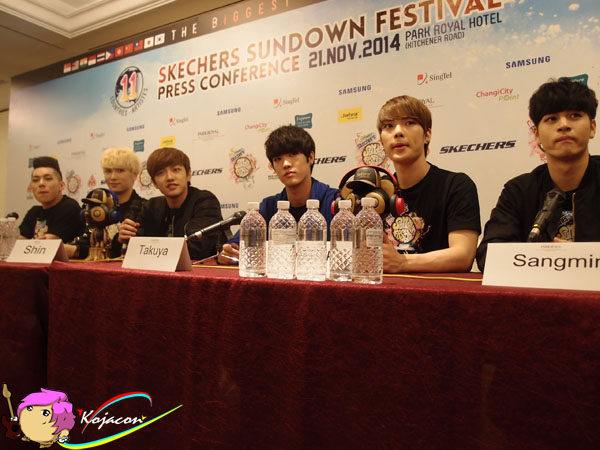 CROSS GENE greeted the media cheerfully with their signature greeting pose and received tremendous cheers from the media. TAKUYA and SHIN led the Q&A session mostly by answering questions regarding about their comeback this year and how they were becoming aware of their overseas fans. Being a multinational group, they are also looking forward to recording songs in Mandarin to get closer to their fans in Singapore and as well as China. The boys expressed their keen interest in coming to Singapore again and jokingly added, “Please invite us!”. 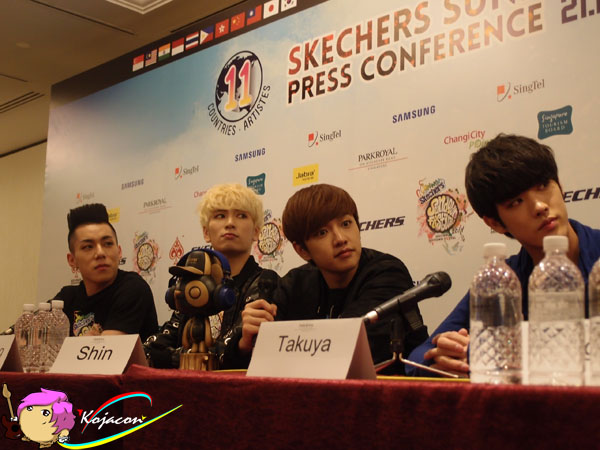 When asked about how they felt in representing Korea in SKECHERS SUNDOWN FESTIVAL, the boys answered that it is a great honor to be performing as Korea’s representatives. As they are aware that this festival has a lot of great artists from different countries, they feel delighted to perform in it and are pumped up for tomorrow’s performance. 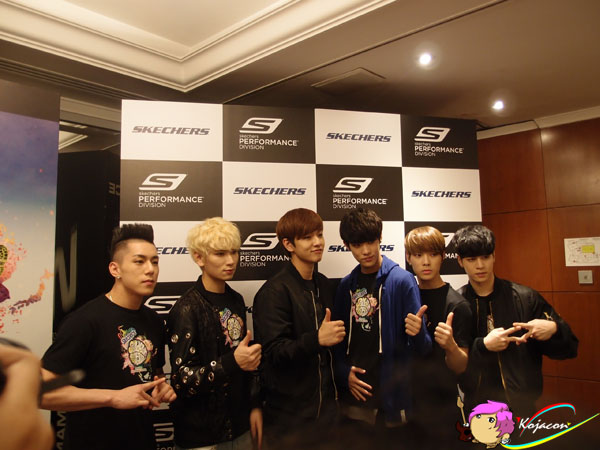 Check out how pumped up they are in our report on their performance on Kojacon soon!

The SKECHERS SUNDOWN FESTIVAL this year is slightly different from the past. Instead of the usual visual kei bands representing Japan, this year we have WEAVER, a j-rock band! 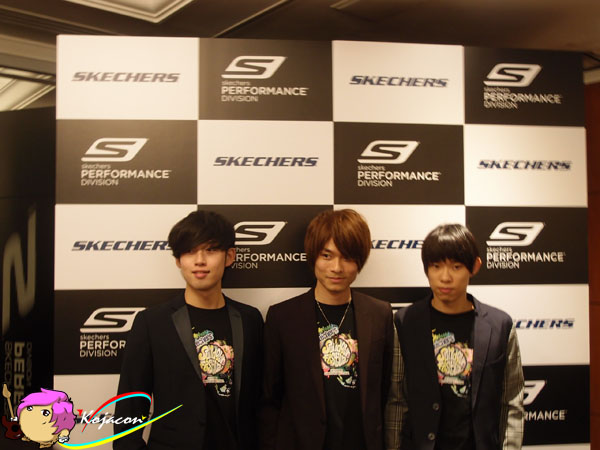 The boys seemed to be at ease with the media busily snapping photos when they entered. It is no doubt that WEAVER is already familiar with us as this is their 4th time in Singapore!

They introduced themselves promptly, with Sugimoto on piano and vocal, Okuno on bass. However when it was Kawabe’s turn to introduce himself, he jokingly took the mascot and asked “Is this my mic?” which earned him laughs from the media and establishing a light atmosphere around the room. 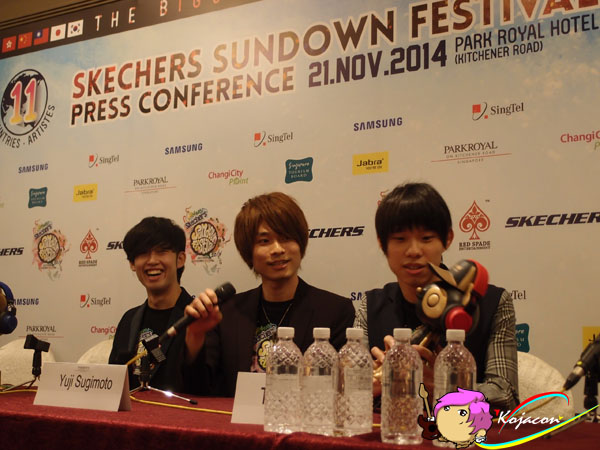 Could you guys share with us what you studied in UK and also why the focus on choosing music as your career?

Sugimoto: We learnt English in high school but it was not enough for us to speak fluently, so we went to the UK to improve our English and make music that we love. In UK, we went to different language schools and also lived in different places. It’s a good experience for us, especially for myself. I am not good in communicating through language even if it’s in Japanese, and not to mention English too, that is why I am singing. 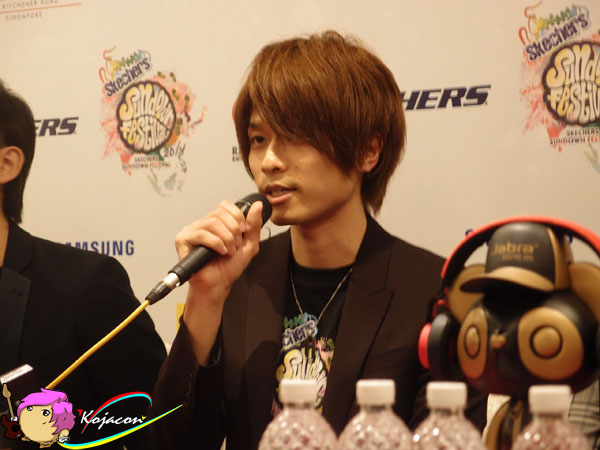 This is also WEAVER’s first overseas performance after getting back from the UK. Now that they have studied English, we were all wondering whether they will be performing in English.

We are all curious. Will we be seeing you guys performing songs in English this year?

Sugimoto: Yes, of course! Some of our new songs are written in English so we will be performing it tomorrow. Please look forward to us performing it. 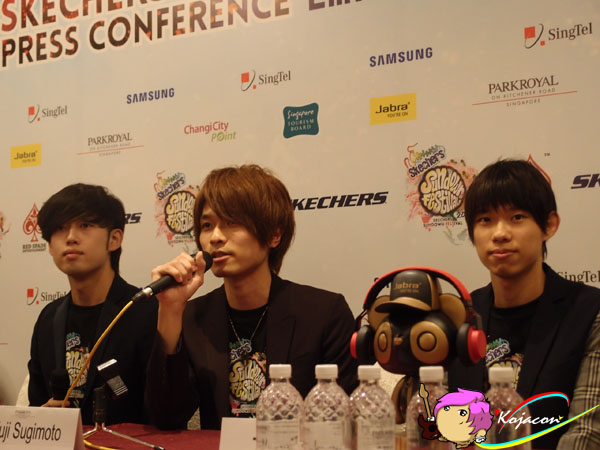 What drove you to conceptualize WEAVER as a piano rock band instead of the usual guitar rock band that we see nowadays?

Okuno: We had a chance to change our style and it was 8 years ago. We were playing a gig in a music venue. At this venue, there are many good band managers around. We met a very nice manager there when I was 20 years old. At that moment we have another member playing guitar. Yuji (Sugimoto) was also playing the guitar during that period. When we graduated from high school, our passion to play music continued. We were wondering at that time what we should do. That manager that we met advised me to perform as a piano band as it was something not usual.

Kawabe: I think if it wasn’t for the advisory, we won’t be able to debut. 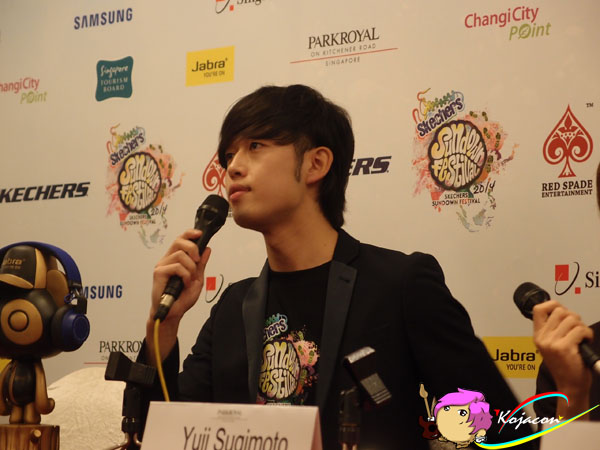 What is your first impression of Singapore when you first came a few years ago? Please share with us your experience.

Kawabe: And this is also the 4th time for us to come to Singapore. Every time we come here, we can find new buildings like aquarium and the botanic garden (Gardens By the Bay).  I think this country is very energetic and it can encourage us to work hard. 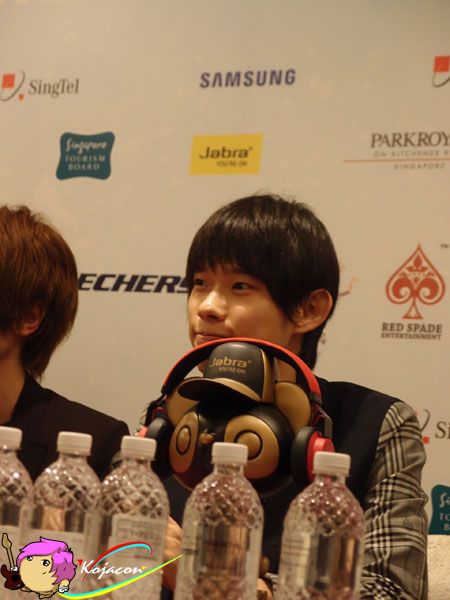 The interview then ended off with WEAVER signing an exclusive sundown festival t-shirt.

It was great seeing WEAVER back in Singapore after a year! Although it feels different now as they are using English to communicate with us, the boys remain the same as ever, their cheeriness unchanging since their first visit here in 2012. We are so grateful to them for coming back to Singapore for every year since 2012!

Want to get hold of the exclusive signed t-shirt by CROSS GENE and WEAVER? Keep a look out for details on Skechers’ facebook page or in stores from now till 22 Dec!